My response to: How can I reach out to Twitter users who have an immediate need for my services? I can see local tweets from great prospects but a reply would be spam.

I do not agree replies would automatically be spam.

Certainly responding could be done in a spamming way. And that should not be done. But you can respond by being helpful. And rely on some of those seeing that you provide useful information wanting to learn more. 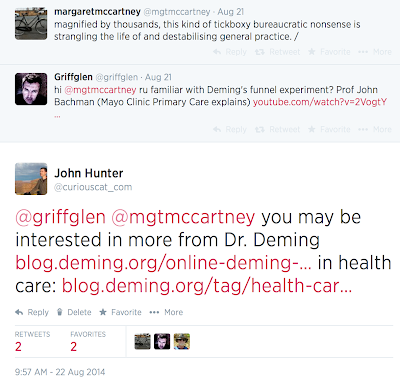 A measure of if you are providing useful replies see how often it is retweeted. I am very surprised how often mine are. I would guess it is over 50% of the time that I (@curiouscat_com) suggest a link would be useful they retweet it.

When I just send a reply without a link they are retweeted rarely. Also when I just post links to useful stuff I find those are retweeted much less often than my direct replies (I imagine if you have tens of thousands of active readers, not just "followers," this data would be less useful because everything you tweet someone retweets...

Another measure would be if people reply by saying you are sending them spam or wasting their time, etc. I have had 0 of these.

The combination of these results has led me to offer suggested links more often. I was nervous at first about people seeing it as spam. 90% of them are links to my blogs because those blog posts are what I know well enough to link so often (I also suggest other articles, blogs or products but less often).

Related: Your Online Presence and Social Networks for Managers - The Benefits of Blogging - Networking is Valuable But Difficult to Quantify
Posted by Curious Cat at Sunday, August 31, 2014 No comments:

My post on this topic goes live next week: Revolutionary Management Improvement May Be Needed But Most Management Change is Evolutionary.

My comments on other ASQ Influential Voices posts on the topic: Future of Quality: Evolutionary or Revolutionary?

Technological change that benefits performance can provide great leaps. It can seem revolutionary but really just keeping the same management mindset and adopting a couple really useful tools or concepts is most likely evolutionary; and where so far most improvement benefit has come from in my opinion.

I do think both are needed. But I also think we exaggerate our revolutionary management changes - I just think it is really rare. We normally keep pretty much the same management system and tweak it will a couple new tools and maybe some new concepts.

The change provide using a few tools (PDSA, flowcharts, control charts) and concepts (mistake proofing, true customer focus) can be huge. But usually these big gains are evolutionary it seems to me. Most often the basic management system remains as it was.

Growth of Quality: Revolutionary or Evolutionary?

The Future of Quality: Evolutionary or Revolutionary?

That dramatic result for management can be seen in much the same way that dinosaurs evolved into birds. It didn't happen in one revolutionary change but at some point the result of continued evolution becomes revolutionary. But each step is often small and difficult to see as revolutionary.

Wordpress wouldn't let me post the last one as a comment as they claim "You do not own that identity." while I am actively logged into my open id account (what bozos). Wordpress have blocked me from making lots of comments over the years. Wordpress blogging software is great. Their commenting processes are horrible and I would suggest anyone relying on them validating people stop. They have had 5 years of failures I have seen, it is time to abandon them and use providers that don't consistently fail for years (for 5+ years Wordpress validation failure revolved around email signins an their messing up the gravatar merger now it has extended to open ID failures by Wordpress). The commenting solutions they offer are sensible in concept just pitiful in practice.

Related: Continual v. continuous improvement - Most of what claims to be management innovation amounts to declaring old ideas as new innovations
Posted by Curious Cat at Friday, August 22, 2014 No comments:

Publishers are Wrong and Amazon is More Wrong

Response to: On Amazon, Publishers, and Book Prices

In the question of who is right between Amazon and publishers I side with neither. In this specific issue, as far as I understand it, I think Amazon is more wrong.

I don't publish my book, Management Matters, on Amazon because they wouldn't let me sell it how I wanted. They want to add on all sorts of restrictions instead of just selling my book.

I do like being a customer of Amazon. But they are pretty obnoxious about being the seller of your books. They don't just want to provide a platform for users to buy your product or service. They want to control your business and how you do business if they are going to sell your product. Which seems absolutely crazy to me. But they have lots of customers they can direct to your door so I understand why people choose to let Amazon dictate the terms of how the seller will run their business in order to get access to those customers.

I also find the annoying ever increasing book prices to be stupid and counter to my interests (for my father's book, where I get royalties). I would rather sell more copies and get a lower cut per copy but the publisher relentlessly jacks up the price. As an author you can about maximizing your income and likely maximizing the spread of your ideas. The publisher cares about maximize their overall revenue (which isn't the same as maximizing one book's revenue) and also their bias it toward higher net profit per book even if that reduces the market for the book. The publisher also doesn't make it available electronically which is also annoying.

I am perfectly happy to avoid both publishers and Amazon as an author. I imagine that decision is much more difficult if you count on your earnings from your writing. I would be happy to make it available through Amazon if they just wanted to sell it not dictate how I chose to operate (LeanPub is a great platform for authors that allows you to control how you will behave and has cool features like letting you set a suggested retail price but also letting users decide what they want to pay).

These huge companies constantly change the rules and are not transparent about it, but other thing I very much dislike about Amazon is obnoxious DRM messing up customer's lives. Maybe they have changed to let authors not bother customers with DRM junk but I don't think that was the case last time I looked.

I also very much like letting users pay a lower prices, but Amazon wants to say if I want to experiment with this innovation I have to fix the price on Amazon at the lowest level. Like many stodgy bureaucracies they have reasons for their rules which make sense to the bureaucracy. I can see if you are not interested in innovation and experimentation as a stick in the mud bureaucracy that such rules make sense. But I am interested in innovation and experimentation and Amazon's bureaucratic mindset doesn't fit with that type of thinking. Which is a shame given how they like to see themselves.

I also want to let buyers get updated copies of the book. Amazon doesn't (or at least didn't when I looked) support this, which is fine. But it is another weakness of very old school thinking that doesn't seem to be keeping up with even 5 years old technology. Again lame for Amazon, thinking they are customer focused and innovative.

I agree the high prices on many ebooks are crazy and should go down. The publishers are being lame about that. I think forcing everything into arbitrary sales prices based on how many fingers we have is idiotic (Amazon's $9.99 rule). The publishers are wrong from keeping ebook prices so high. Amazon is more wrong about how they want to deal with that. I do believe Amazon should have the freedom to favor products that meet Amazon's desires so favoring books priced at $9.99 or something is within Amazon's rights. And choosing to stock less of books that are not in line with Amazon's desires is within their rights. Being super obnoxious about how far Amazon goes about things though can tip the balance into something being within their rights and reasonable behavior to being within their rights and unreasonable behavior. Amazon is past that already.

And it doesn't seem to me this is a mistake by Amazon. It is the manifestation of their view that they should control their suppliers business models. Amazon doesn't need to just change the decision here to be less unreasonable. They need to realize the idea that they should be determining their suppliers business models is a bad corporate policy and they should return to focusing on providing customer value and value to their suppliers. Work with suppliers to help them understand better ways to operate in the unfolding new ways or working but let those suppliers make their decisions about the business models they want without Amazon resorting to extremely obnoxious behavior if they don't chose to decide every detail the way Amazon wants them to.

Great employees want to: Money and benefits matter, but especially for retaining people, providing an environment where they can take pride in their work matters more. For recruiting it matters but is often difficult for potential employees to appreciate.
Post on building a great team
As far as motivation, if you hire and manage right this isn't something you need to do. You need to eliminate de-motivation not to worry about motivating employees.
In response to Clarity question: What's an alternative to equity based compensation that recruits, motivates and retains employees?
Related: Let employees take pride in their work by eliminating de-motivation in the management system - Hiring the Right People
Posted by Curious Cat at Monday, August 11, 2014 No comments: