Response to: Toyota is Admired for Good Reason… But About Those Rotating Job Shifts…

Thanks for another good post. It points out that while Toyota does many things very well they have opportunities to improve. And I am sure they agree they have a huge number of things to improve.

Even if you worked on improving it, likely during those PDSA cycles many people would be annoyed. And if you were working on it, you could get blamed, you could be tarnished as someone people didn't like it and didn't appreciate "you doing this to them." If, on the other hand, no one is making significant efforts to improve, even if people are annoyed it is at some amorphous policy and usually doesn't stick to 1 person.

If the dis-satisfaction does accumulate toward 1 person (say the plant manager) that person then often will push through and deal with it - or assign someone to deal with it and stay on them to make sure they do the difficult work (even if doing so will make that person's life much more difficult).

Now I would hope Toyota is better managed than that and doesn't shy away from important work just because the people that would take the lead have strong reasons to avoid working on that task.

There are often so many things to improve that it isn't too hard to shift the focus away from something that no one wants to take on. Sometimes though things are so important they must be taken on. Usually those would be more direct and obvious problems. Systemic problems that cause great damage but in a less visible way (such as rotating job shifts) are less likely to be addressed.

Coping with this issue (of avoiding unpleasant, systemic and long term rather than acute problems) is one of the things that separates great corporate culture from decent or bad corporate culture.

If there are fairly obvious or fairly easy improvements those would likely be acted on. There are, rarely, but still sometimes, instances where those vocal or politically powerful individuals who would lose out in a fairly obvious improvement will prevent action.

I am pretty sure Toyota doesn't have fairly easy improvements on this issue, that they must realize is important, that they are just not getting to. I am a bit less confident that Toyota isn't avoiding trying to find solutions using a PDSA type effort because it would be really hard and risky work for whoever takes it on. Also Toyota can try to rely on the good will built up through their many efforts to expect enough employees to say that they will accept the suffering caused by this policy for the good of the everyone.

I am not convinced there are not ways to improve the situation. And I am pretty confident it is important enough to try. And I believe (though I might be wrong) with a concerted effort of knowledgable people improvements that would make a big difference in the quality of life could be achieved. I am not so certain those people involved in leading the effort would be seen in great lights though even if they "succeed." People are much more likely to remember negative consequences to them personally, even if they gain much more than they lost overall. And most will remember the effort negatively if they lost only a little but overall the gains (to the overall organization) were much bigger: in such cases many will hold onto feelings that they were harmed by those that took action.

Related: Respect for People Doesn’t Mean Avoiding Any Hint of Criticism - The Importance of Critical Thinking and Challenging Assumptions - Unpacking the Components of Hard Work to Design Better Work Conditions
Posted by Curious Cat at Wednesday, January 31, 2018 No comments:

Creating Web Sites That are Reliable from a Usability Perspective

Comments on: Applying Kaizen to My Various Websites, Trying to practice what I preach...

Good job actually practicing what we recommend others do (kaizen, customer focus...). More management consultants need to do so. I found another thing I think can be improved, this screenshot shows how a floating box (to the left of the screen) blocks the main content: 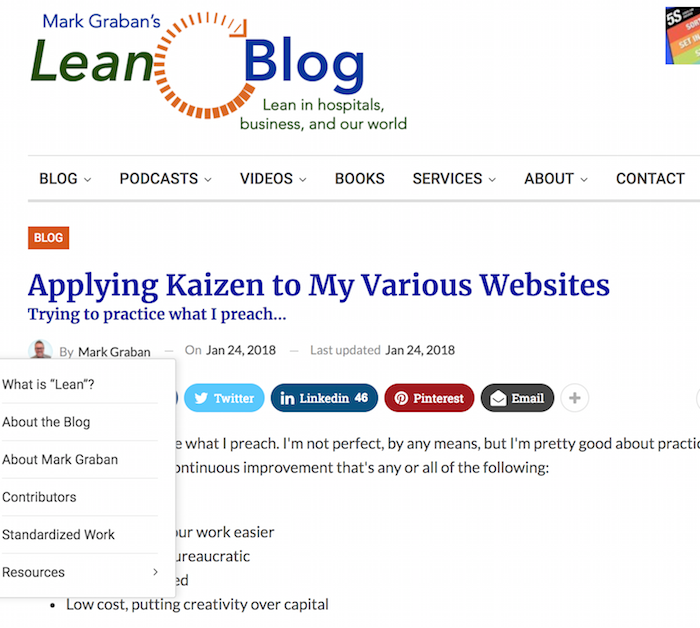 That covering box moves as you scroll the page so it is always covering part of the content.

[Update: further testing showed this was a temporary glitch - it didn't replicate even on my machine. See comments on the original post for more details. Browsers are not perfect in executing code that is meant to be on the page, sometimes it doesn't quite download everything right, or it misses one action (such as onmouseout) and then behaves oddly...]

One of the big problems I see for web sites development is a failure to understand and test how a wide variety of users will experience a webs site. Often they are designed to look nice for the conditions that the designer has (perhaps huge screen, perhaps low latency, which can mask code issues for users that have high latency internet connections) and that they share with those who approve designs.

It is one thing, for a blog from 1 person to have less than ideal usability for a wide variety of user views. I can completely understand that. Granted I do believe those of us that encourage others to continual improve also need to do that ourselves. What I can't accept is how many web site with huge budgets have very poor coding that results in many users (given the very large user base) have to suffer from bad usability issues.

Those big budget sites should know better than to code in a way that fails to value basic web concepts such as the extremely wide variation in how users will view the web site (screen size, operating system, browser, window size, font size preferences of the user...).

We have an epidemic of bad coding practices that result in failures which then are excused by those responsible as edge cases. Good coding practices would avoid the errors. But instead we code using needlessly complex and error prone ways and then say that we can't deal with the edge cases that only impact a few people. The problem isn't that those few people are requesting some special feature. The problem is the practices used are creating solutions that look nice for some subset of cases but that are not acceptable for other users. Coding with the entire user base in mind from the start would avoid any need to treat those "edge cases" that were only made into edge cases because the coding solutions are not designed for the entire spread of variation in users needs.

The most cost effective and reliable way to deal with this is often to just avoid extra complexity. Having the popup box with additional content can be cool and it can be coded in ways that don't create the issue I see here. But to do that in a way that doesn't create bad usability for some users is complex. Sometimes you can rely on fancy Wordpress themes that have properly dealt with all those complexities. But in my experience, that is very rare. They do ok with a large set of the users but create really bad usability issues for users that don't fit what they considered the normal use case (and created "edge cases" that have bad usability). Or if you are a big budget site you can try to code all the extra complexity yourself. That can be done successfully but I find it fails often. They create fragile systems to deliver and then are overwhelmed at how to deal with all the users that don't fit their expectations for users and they just decide to let those users suffer.

Well argued. I am new to investing in REITs as an investor but I agree that the "conventional wisdom" doesn't make sense. I primary have dipped into only apartment REITs.
As with many misleading claims there is some truth behind the claims about REITs and interest rates.
It seems to me that the 3 biggest explanations for REITs declining if interest rates rise are

Related: Looking at Real Estate in This Challenging Investing Climate (2015) - Looking for Yields in Stocks and Real Estate (2012) - Landlords See Increase in Apartment Rentals (2010)
Posted by Curious Cat at Saturday, January 20, 2018 No comments: